A common question I get is why don’t men pursue women?

The answer is simple: because they don’t have to.

Why should they when the women pursue them?

Below is the video notes for a video I did on the topic.

Watch the video at the bottom of the page, which goes into more detail.

1) You Won’t Know Whether He Was Ever Into You

If you ask him out and otherwise pursue him in the relationship, how will you know if he was ever into you? Some men just go along to get along. Some men are lazy. Some men have no qualms in dating Mrs “right now” when they know she will never be “Mrs. Right”.

When times get rough, if the man is the one who pursued you, he will remind himself that at 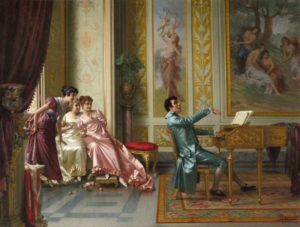 some point he was crazy about you even if he is not now.  However, if you are the one who pursued him, you won’t even be able to ask, “Why did you marry me then’?

Do you want him thinking,  “I should never have let her CONVINCE me to go out with me?”

3) You Are Giving Up Your Femininity

Part of being feminine is being pursued.  In courtship, woman are to be delicate, not forward.

Understand, it is a beautiful thing to be pursued.

If you pursue, you are acting like a man.

4) When a Woman is Rejected, It Hurts Bad

“Hell hath no fury than that of a woman scorned”.

Women were not meant to be rejected in this way.  If you pursue a man and he says no, how will you feel?  Your whole dignity is impacted.

5 ) When You Pursue Men, You Set a Bad Precedent

If you get married, do you want to be in the man’s role? Do you want to be the one leading the relationship and being in charge?  I bet you don’t. Don’t set a bad precedent.

6) If You Don’t Pursue Men, You do Your Part in Bringing Chivalry Back

Men were meant to do the hard things.  Men have become so frightened that they don’t want to even enter the courtship game.

We need to help our men be strong, not make it easy for them.

So ladies, can we agree that we will stop pursuing men?   Please.